1. Physical background of tsunami.  “Tsunami” comes from two Japanese words “tsu” (harbor, port) and “nami” (wave). A tsunami is a huge wave caused by an earthquake on the seabed or a volcanic eruption, displacement of the underwater crust. Tsunamis are often caused by underwater earthquakes and are one of the most destructive natural forces in the world. Its speed is the same as that of an airplane, destroying coastal continents and settlements.
An earthquake generates a tsunami if it is of sufficient force and there is violent movement of the earth to cause substantial and sudden displacement of a massive amount of water. Indeed, a tsunami is not a single wave but a series of waves, also known as a wave train. The first wave in a tsunami is not necessarily the most destructive. Tsunamis are not tidal waves.
When a tsunami occurs in the deep sea, its height is about 1 m, and the propagation speed is very high, when it reaches the shallow sea, the speed begins to grow slowly, the wave height can reach a height of 35 m. Surprisingly, tsunami waves can be very long (as much as 60 miles, or 100 kilometers) and be as far as one hour apart. They are able to cross entire oceans without great loss of energy. The Indian Ocean tsunami traveled as much as 5,000 kilometers to Africa, arriving with sufficient force to kill people and destroy property.
Scientists say that a great earthquake of magnitude 9 struck the Pacific Northwest in 1700 and created a tsunami that caused flooding and damage on the Pacific coast of Japan.
If we consider the worst tsunami in recent history the hardest event occurred on December 26, 2004, a magnitude 9.1 earthquake struck northern Indonesia, affecting 14 countries in the Indian Ocean and killing about 230,000 people. July 17, 2006, a magnitude 7.7 earthquake struck off the town of Pangandaran and set off a tsunami of 2m high which had killed more than 300 people. March 11, 2011, a magnitude 9.0 earthquake near Tōhoku caused a great tsunami struck and killed more than 18000 people. 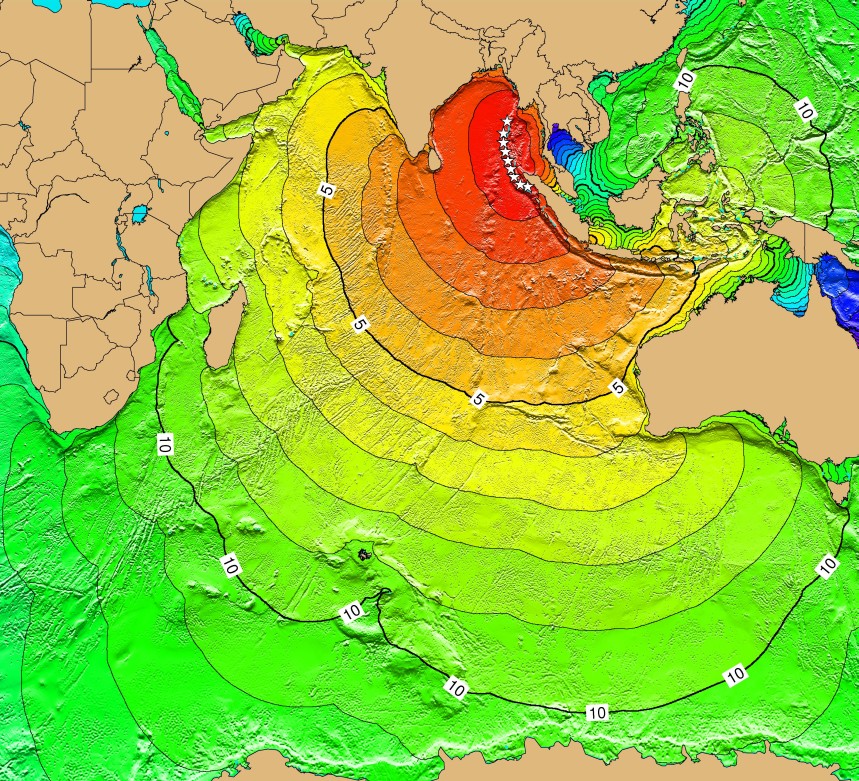 Governing Equation. The fundamental equations of tsunami propagation in the shallow water are given by

is a source term related to the formation of a localised disturbance in the first stage of the tsunami life, and